This guide will answer what is a Riff in music, provide examples of musical riffs, and explain the differences between a riff, melody, and hook.

What Is a Riff in Music?

A Riff in music is a small music sequence played repetitively. A Riff repeats the same basic notes and rhythms throughout a song. A riff is what you usually hear in rock songs when the guitar solo comes in, and it’s what you typically hear in Hip Hop when its rap verse enters into the music.

What Is a Riff in Music?

Riffs usually consist of a repeated sequence of chords, melodies, or rhythms and can be played on any instrument. However, they are often played on the guitar, bass, or drums.

Riffs appear most commonly in Western popular music and rock music. They are the main components of most blues, jazz, funk, and rock songs.

Riffs can also be found in other genres, such as progressive metal, thrash metal, funk rock, classical music, fusion jazz, and many types of electronic dance music, including acid house and other forms of rave music.

History of Riffs in Music

The earliest riffs were what we know today as ‘ostinatos,’ which is a fancy way of saying that it’s a short little pattern or sequence.

The term riff was first popularized in the 1950s, and 60’s when rock n’ roll became extremely popular. Chuck Berry, Link Wray, and Dave Davies are all credited with popularizing guitar riffs in music.

Riffs are an essential part of making rock music sound like rock music. Many classic rock songs like Deep Purple’s “Smoke On The Water”, AC/DC’s “Back In Black,” and Led Zeppelin’s “Whole Lotta Love” would be nothing without their memorable guitar riffs.

Purpose of A Riff in Music

The main purpose of a riff is to provide rhythm and harmonic support to the melody or leading hook of a song. A riff generally lasts for four or eight bars but can be shorter or longer.

Riffs can also be used to provide transitional breaks between verse and chorus because of what is known as a riff-bridge. The song’s bridge separates what would be considered the verse and chorus melody.

Riffs make rock songs recognizable and what everyone instantly thinks of when they talk about a particular song. Suppose someone talks with you about “Smoke On The Water.” You would probably instantly think of the riff that plays throughout the song before.

Riffs can either stand on their own or be combined with other riffs and melodies to create a song. It depends on what the songwriter wants to do.

Related: What Is A Chorus

What’s An Example Of A Riff?

A riff is a short, repeated musical phrase or figure that helps to establish and define a song’s melody. It often serves as an introduction to the verse or chorus and can be used as a hook to make the music more memorable.

Riffs are often played on guitar but can be performed on other instruments. Some most famous riffs in popular music are as follows:

“Smoke on the Water” by Deep Purple

This classic rock song is best known for its iconic riff, which was once voted the most excellent riff of all time by a Guitar World magazine readers’ poll.

The riff is simple but incredibly catchy, and it’s easy to see why it is one of the most famous riffs in rock music history.

This riff has been played in countless music classes since it hit the radio waves in 1974. It’s one of several riffs that have come to define the Southern rock genre.

The intro riff is played on guitar and bass, and it features a catchy country-style melody that is easy to learn and fun to play.

This Grammy-nominated metal song is best known for its dark and menacing riff, opening the song and setting the tone for the rest of the album.

The riff is played on guitar and was one of the first heavy metal riffs to feature a heavily distorted sound.

“Back In Black” by AC/DC

This classic hard rock song is best known for its signature riff, which Angus Young played.

The riff is simple but incredibly catchy, and it’s easy to see why it is one of the most popular riffs in hard rock history.

This bluesy rock song is best known for its iconic riff, played by Jimmy Page.

The riff is simple but incredibly catchy, and it’s easy to see why it is one of the most popular riffs in rock history.

What Is The Difference Between A Riff & Melody?

A riff is a short, catchy phrase in music that is often repeated. It can be played on any instrument but is often used in guitar-based music.

On the other hand, a melody is what you might sing or hum along to. It gives a song its distinct character and often appears in the chorus. Melodies are, however, not limited to vocal music – they can appear in any type of composition.

How Do You Make A Riff?

A riff can be created on any instrument but is often played on a guitar. You can make a riff by altering what notes you play or chords you use. For example, a riff can be made by playing the first three major scale notes ascending and descending up the scale.

The riff makes listening to music very interesting because it allows people to dance, sing along with words, and connect themselves to the song they are listening to.

What Is A Riff In Singing?

A riff in singing is a melodic pattern of ascending and descending notes repeated throughout a song. Riffs can be complex or straightforward, but they must be catchy and easy to remember to become famous.

Singing riffs require that the singer perform a textural or timbral variation on what they sing. They will often change what octave they sing in, what vowels they use, or what rhythms they emphasize.

Riffs in singing are often associated with soul and funk music, but they can be found in all types of music.

Some examples of famous riffs in singing are “I Will Always Love You” by Whitney Houston, “Respect” by Aretha Franklin, and “Hey Ya!” by Outkast.

What’s The Difference Between A Hook & A Riff?

Hooks and riffs are both integral parts of music, but what’s the difference between them? A riff is a short, repeating phrase, while a hook is a catchier melody that may be used as the main chorus or refrain of a song.

Most often, guitar players will create riffs while singers will create hooks. You can usually identify a riff by its heavy, driving sound, while hooks are typically more melodic and catchy.

What Is A Riff In Guitar?

A riff in guitar is a group of notes that are played together one after the other, usually in the order of what is easiest for the musician playing them. Most guitar riffs are played during the instrumental portion of a song.

Guitar riffs sound impressive, but their versatility makes them particularly unique. Most riffs can be played in several different keys; this allows more than one guitarist to play together on stage or for one guitarist to switch between playing lead and rhythm guitar.

How Do You Practice Riffs?

Riffs are what makes music what it is. Musicians worldwide rely on riffs to make their music memorable, from funk and electronic to metal and acoustic.

Practicing riffs makes you a better musician and lets you strengthen your skills in music. Riffs can be challenging to play, but they make the best sound.

Start with warming up your fingers by playing scales or technical exercises. Make sure that every finger is warmed up well; you’ll need complete mobility in your hand to be able to play riffs quickly and accurately.

You’ll need to visualize what you’re going to play – what finger will go where. You’ll need a mental roadmap to follow as you begin playing.

Start practicing slowly at first; keep an eye on your fingers so that they all move correctly. Once you’ve got the riff down, start speeding it up. Make sure that your timing is still accurate – there’s no point in playing a fast riff if you’re not playing it correctly.

Here are the most popular items on Amazon to learn guitar riffs. 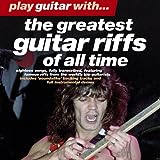 Summary of Riffs in Music

A riff is a repeating phrase or set of notes played on an instrument. It can be simple or complex, but it must be catchy and easy to remember to become memorable. Riffs are often found in guitar playing, but they can be found in all types of music. You can usually identify a riff by its heavy, driving sound.

We hope you now understand what a riff is and how it applies to music.