Here is a quick guide that will answer what is a condenser microphone, how they work, compare them to different microphones, and how to use them.

What is a Condenser Microphone?

What Is A Condenser Microphone?

Most people choose condenser microphones because they are flexible, sensitive, accurate with transients, and have a high level of sound quality. Certain condensers can, however, surpass others in certain respects.

Since there are so many condenser mics on the market, it isn’t easy to develop a list of generalities that describe them all. To understand what a condenser microphone is, we must first understand its components.

Backplates are static pieces of metal located behind the diaphragm. The diaphragm vibrates while the backplate remains still, and the air pressure difference between them from the sound waves creates capacitance, which is then translated into an audio signal.

Electricity is stored in a capacitor between two components, and the backplate in a condenser microphone serves as one of these components.

Typically, a capsule consists of various components, such as a diaphragm and a backplate. Most of the time, the entire mic component that captures sound is described as the capsule.

Many people also use the terms “capsule” and “diaphragm” interchangeably, although this is incorrect.

The diaphragm serves as the capsule’s membrane. The thin, electrically-conducting side of the capsule vibrates opposite the backplate to create capacitance. Diaphragms are usually coated with gold to enhance electrical conductivity.

Condenser microphones have an impedance converter, which increases the voltage generated by the diaphragm and backplate vibrations. Most microphones have this converter since they create a low current despite producing sufficient voltage.

A dedicated power supply or a USB or XLR cable is used to supply power. The impedance converter amplifies the current to provide power to the microphone.

What Is A Condenser Microphone Used For?

However, they are not as effective for louder sounds as those created by guitar or bass amp, and dynamic microphones are a better choice than condenser microphones for these applications.

How Does A Condenser Microphone Work?

The components mentioned above have already been discussed, but let’s discuss how they work together to record and transfer sound.

The condenser mic capsule has a membrane containing a conductor material like gold, and a metal backplate surrounds this membrane.

The diaphragm vibrates near the backplate when sound waves strike it. The microphone membrane vibrates against a metal backplate in a capsule that causes changes in air pressure (sound waves).

Differences in pressure between a backplate and a diaphragm (capacitance) are recorded via voltage, which is amplified and transformed into audio sound waves in a recording device or software.

See the video to know how a condenser mic works.

What Are The Four Types Of Microphones?

There are many different microphones available. Finding the most suitable microphone is not an easy task.

However, this is not as difficult as it may seem. Making a decision between your choices and finding the appropriate tool will depend on what type of microphone you need.

Following are the four types of microphones used widely at the moment:

Choosing a microphone starts with determining what you want to use it for. Not all live performance mics are the same as studio mics. Before purchasing a microphone, you should determine whether you need a vocal mic, an instrument mic, or a drum mic.

Let’s now dive into the condenser and dynamic microphones in more detail.

Generally speaking, condenser microphones are the most useful for capturing vocals and high frequencies. In addition, they are the preferred microphone type in most recording studios.

Condenser mics work very well for capturing acoustic guitars, drum overheads, and vocals. However, they are not as effective for louder sounds as those created by guitar or bass amplifiers.

Condenser microphones come in two general types: large-diaphragm and small-diaphragm. Each one captures sound differently, and each is used differently during recording.

In general, devices with large diaphragms receive audio sources from the side. The diaphragm is longer than an inch, allowing the capsule to cover a larger surface area.

Mics with large diaphragms are usually fixed in a stationary position when used in a recording booth. A diaphragm with a large diaphragm is often used to capture deep bass notes since it produces a widening effect that fills and enhances the mix.

Small-diaphragm condenser mics have diaphragms less than an inch long and are often referred to as pencil microphones due to their small size and long, thin designs.

The diaphragm is typically positioned in front of the microphone, while the energy from the source is directed to the top of the microphone. Even though they can be handheld, they are generally mounted on a studio wall or used on a desktop.

Furthermore, a device with a small diaphragm is perfect for picking up transients and other high-end sounds.

A dynamic microphone is best used in louder environments or with booming sounds. Since they can handle loud sounds and have a decreased sensitivity, they are the perfect choice for live performances.

The fact that dynamic microphones are extremely durable makes them excellent for live sound. Although it is not wise to drop a microphone, it will be less damaged if you drop a dynamic mic than a condenser mic.

Additionally, dynamic mics do not require batteries or phantom power, and they are typically less expensive than condenser mics. If you take reasonable care of your dynamic mic, it will remain functional for a lifetime.

What Are the Best Condenser Microphones?

Here are the 5 best selling Condenser Microphones on Amazon with thousands of customer reviews. 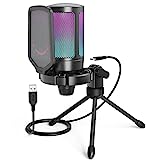 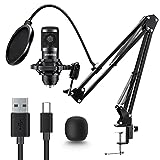 Are Condenser Mics Good For Instruments?

Generally speaking, condenser microphones are the most useful for capturing vocals and high frequencies. In addition, they are the preferred microphone type in most recording studios.

Condenser microphones are also known as capacitor microphones, and they are mainly used in studios due to their precision and detail.

Condenser mics are ideal for capturing sounds from instruments such as acoustic guitars and drum overheads. You can also use them to record vocals. However, they don’t work well with louder sounds, such as guitar amplifiers and bass amplifiers.

Both are based on different transducer principles, and there is nothing related to the directional properties of the microphones. Therefore, the question of which one is better is not relevant.

It depends on what you need. If you are looking for a microphone for your studio recordings, then consider a condenser mic. For louder recordings, like live performances, you may want to choose a dynamic microphone.

Can You Use A Condenser Mic For Live Vocals?

Condenser microphones are best suited for studio recording. They are sensitive to noise, so they are not recommended for use in live situations.

If you were to use a condenser mic for live vocals, you would need to find a way to reduce the ambient noise caused by the crowd or sound equipment. One way of doing this is by using acoustic panels.

They will absorb much of the sound waves and prevent them from reaching your microphone.

A condenser microphone contains a diaphragm that is suspended by a fixed plate. Pressure from sound waves pushes against the diaphragm, causing it to move.

Condenser microphones are often used for picking up delicate sounds due to their thin diaphragms and increased sensitivity.

We hope you found this information on Condenser Microphone helpful.

If we missed anything, please share it in the comments.